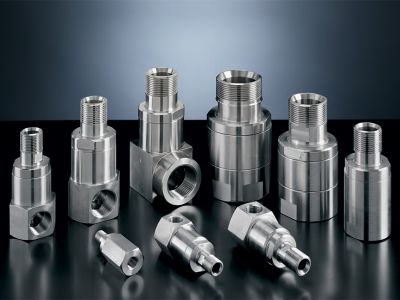 The swivel joints of the SSSB series are designed to be mounted between a movable flexible hose and a rigid component of a machine in order to allow and compensate rotations: the movement of the stem on his own axis prevents hose damages.
They are produced entirely in stainless steel AISI 316 except the internal parts made in hardened carbon steel. This technical choice is necessary to guarantee to the SSSB series the same performances of the standard SJ series, since the AISI 316 is not hardenable and also it may seize when there is friction between two surfaces in motion, especially under pressure. A suitable system of seals isolates the internal parts from substances that pass inside the joint.

The SSSB joints are mainly used in chemical, oil, naval and food plants or in all appliances susceptible to heavy corrosion.


Connect with us on